My friend from school is a P90X Success Story too!

26 years ago, I went to elementary school with my friend Michael J Friedman. As we got older, we went our separate ways and didn’t talk for 20 years.

We were recently reconnected and we DISCOVERED that we’ve had VERY SIMILAR experiences while separated.. it’s CRAZY:

1) We both got really out of shape as we got older
2) We both found P90X and had amazing transformations
3) We both fell in love with fitness & helping other people change their lives with fitness
4) We both became coaches (him as a personal trainer, me as a beachbody coach)
5) We have VERY similar coaching philosophies.. that people simply need someone to believe in them.. to support them, and they can COMPLETELY change their life around
6) We both learned important life lessons on discipline and what’s possible through P90X:

He’s a bit of a rockstar.. he has COACHED Contestants from the Biggest Loser TV Show. He has run Marathons and ULTRA Marathons… he is also an Ironman athlete!

He said that he learned during P90X, he could accomplish anything.
That’s exactly what triggered a lot of change in my life!

So here’s the KICKER: He JUST became a Beachbody Coach on my team and he’s already earned 20 Success Club Points his FIRST MONTH.. running 2 challenges and adding 3 coaches to his team!

I cannot tell you how THRILLED I am to be reconnected with Michael and to be coaching with him side by side! Crazy isn’t it!?

He went from stuffing his face and drinking booze to being an ELITE athlete and coach!

Join me in congratulating Michael in turning his life around!! 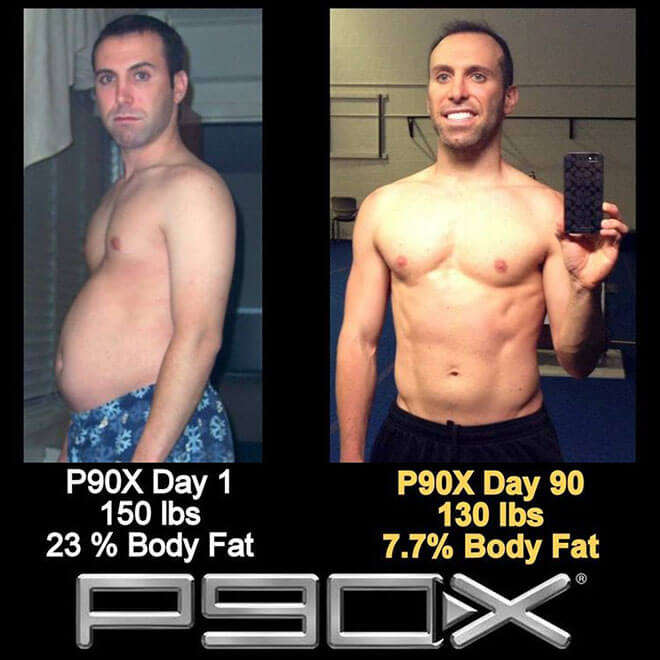 IN HIS OWN WORDS:

P90X not only changed my life, but it SAVED my life! In 2006 I was diagnosed with High Blood Pressure and was in a severe depression. I borrowed a friend’s P90X, did it for 30 days, and QUIT! For 3 years I struggled with eating healthy, my weight, and depression. But at the end of 2009 I bought P90X for myself, and told myself that no matter what I was going to commit for the entire 90 days. What happened after completing the 90 days of P90X is nothing short of a miracle.

1) What workouts have you done and what was the time frame for your transformation?

I first started P90X in 2006 but quit after a month. I attempted it again in 2009 and made a promise to myself that I would do it for 90 days NO MATTER WHAT! And you know what, I did!!! I’m now getting ready to start Insanity and I couldn’t be more excited!

2) What were your before/after stats (weight/bodyfat)

3) What your life was like before and how it has change/improved?

Before P90X I was overweight, out of shape, stressed out, I ate horribly, and worst of all, I had High Blood Pressure. At 26 years old I was told I needed to be on medication to control my blood pressure level because of how high it was. Knowing that my ENTIRE family was overweight and that all 4 of my grandparents had open heart surgery, I knew I needed to make a change in my life. That’s when I got P90X.

It took me 3 years to find the strength and courage to complete a full 90 days without cheating, but my life has completely changed since dedicating myself to finishing it. The confidence I gained is worth more than anything I will ever own. Since finishing a full round of P90X, I’ve gone on to run 14 FULL Marathons (26.2 miles), countless HALF Marathons (13.1 miles), 1 ULTRA Marathon (52.4 miles), an Olympic Distance Triathlon, and even an IRONMAN Triathlon!

I’ve accomplished things that I never even thought were possible. I’ve set goals for myself thinking that I would ultimately fail, but I still attempted them because I’ve learned that trying and failing is so much better than not even trying at all. I quit my full time job working at a University to become a Personal Trainer. In less than a year I was given the opportunity to train a contestant on The Biggest Loser and helped her lose 145 lbs in 7 months and win $100,000! Two months later, I was given another opportunity to train another contestant on The Biggest Loser and helped him loser 160 lbs in 7 months and also win $100,000! I’ve helped hundreds of people lose thousands of pounds and regain their lives! But out of everything I’ve accomplished, the thing I am most proud of is that my blood pressure is a healthy 112/72 WITHOUT medication!!! That right there says it all. Health truly is wealth!

4) How has the support of a coach and this team helped you?

When I first started P90X, I did it alone, and that is precisely why I failed. No one held me accountable. I didn’t push myself. The meal plan overwhelmed me. To make a long story short, I used every excuse at my disposal in order to quit. The 2nd time I did it, a good friend and I did it together. We supported each other, held each other accountable, and didn’t let the other person give up. Essentially, we were each other’s coaches.

After working as a successful Personal Trainer for 4 years, I’ve learned how to coach people to succeed. The reason why most people fail is because no one supports them. They have no one on their side cheering for them, or kicking their butt when it’s needed! I didn’t succeed as a trainer simply because I can teach someone how to do a proper push up. I succeeded because I’ve learned how to help people deal with their inner demons, conquer their fears, keep them motivated, and show them how to celebrate the small things.

I’ll never forget the first time one of my clients, who was in her 40s, looked in the mirror and saw a gap between her legs. She started crying because the last time she remembered seeing space between her thighs was when she was 8 years old. It was one of the best moments of her life, and I was able to share it with her. That’s what being a coach is all about!

5) Besides the support of a coach & team, what was the key to your success?

The key to my success was learning how to trust the process. I had to unlearn so many bad habits that I spend YEARS of my life learning. From something as simple as being told I had to eat everything on my plate when I was a child to the need for instant results. When I would go out to eat, it was engrained in me that I had to eat everything on my plate, even if that meant eating a 1,600 calories in a single meal. Portion sizes today are ridiculous, and I only needed to eat about a quarter of what was being served to me. Plus, I didn’t gain 30 lbs of body fat in a day, a week, or even a month. I gained it over a long period of time. So I had to accept that it was going to take a long period of time for me to lose it. Once I learned how to unlearn what I had been taught, as well as accept that real results don’t happen overnight, I set myself up for success. My nutrition is so much different today! For starters, I drink Shakeology every single day! I also eat so many different kinds of fruits and vegetables that I’m surprised I haven’t started growing roots yet! I also eat every kind of meat known to man—different kinds of poultry, red meat, and seafood. And I eat so much fat but every bit of it comes from a healthy source such as from nuts/nut butter, avocado, and olive/coconut oil. I no longer count calories but 90% of my diet is from a natural source. I do on occasion, maybe 2-3 times a month, indulge with a cheat meal such as pizza, cheesy fries, cheesecake, or something just as decadent.

7) What tips would you give to someone who is new and starting out?

TRUST THE PROCESS!!! Be prepared to deal with your emotional issues. Don’t sabotage yourself. Don’t get mad at yourself if you slip up. Never wait until Monday–when you decide you’re ready to begin, start immediately and then keep the momentum going! Celebrate the NSV’s (NSV = Non-Scale Victories) every single day! Don’t try to do it alone—it’s okay to ask for help! Asking for help isn’t a weakness, but being afraid to ask for help is. And finally, TRUST THE PROCESS!!! Stop searching & start learning how to get rid of bodyfat. I've helped a ton of people do it and in this video, I'll show you the 3 biggest mistakes people make and how YOU can avoid them.